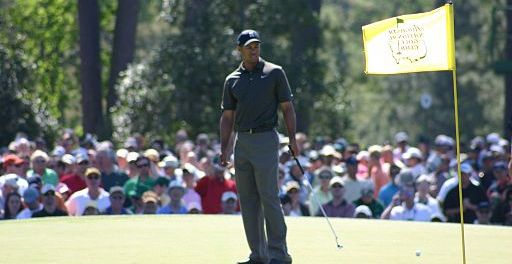 I’m not a golfer.  I tried to play the game, was lousy at it, and quit at the suggestion of the pro who was giving me lessons (he complained I was bringing his game down).  So when I write that Tiger Woods  will never hoist another tournament trophy over his head, I do so not because I possess any particular expertise about golf.

My assessment has less to do with Tiger’s skills (which are, indisputably, top-notch) than with his loss of the more central ingredient in his prior success:  His sheen of mystery and invincibility.

Raised and groomed not merely to be a golfer, but to be a great golfer, Woods lived out that plan with meticulous determination and concentration.  Nothing, it seemed, interfered with the development of his skills.  But as he progressed as a pro and enjoyed a string of early victories, one could sense the emergence of an added dimension to Tiger’s game, as though an invisible but palpable force-field  seemed to build around him.

You could feel it on the golf course.  Whether paired with a rookie or a veteran, Woods in a tournament was a solitary, intimidating unit of physical energy, a brooding superhero who seemed downright disdainful in the way he’d ignore whomever else was at the tee.  Crowds would part for him more reverently than for anyone else, as if his aura pushed them back, and players shied from standing too close to him, as if his aura served as a guard.

That aura–that sheen–was purposefully nurtured as Tiger’s career progressed.  With his perfect wife, his perfect children, his expertly manicured but heavily guarded image–and, of course, some damn good golfing skills–Woods’ persona grew outsized.  He became not merely a brand, but an icon.  And because so few people ever got to glimpse beyond the sheen–because virtually no one was privy to anything that would reveal him to be anything less than a focused, laser-like golfing machine–the legend of Tiger’s perfection became a surreality.

This perceived reality was, of course,  intimidating to his competitors.  In the exceedingly mental game of golf, doubt or hesitation–the presence or absence of either–is often the difference between winning and losing, and Tiger’s carefully cultivated sheen of invincibility surely had its doubt-inducing, hesitation-inducing effects on many opponents.  But to the eyes of this observer, the most profound effect of Tiger’s surreal aura of omnipotence was on Woods himself.

Because golf is such a mental game, a golfer who devoutly believes in the legend of his own supremacy  has all but slayed the game-ruining demons of mental doubt and hesitation.  Favor that golfer with great technical skills, and the result is a virtually unbeatable golfing phenomenon.

So it was with Tiger.

The catch, of course, is that when a pillar of one’s perceived omnipotence is one’s own unshakable belief in that illusion, shattering the illusion shatters the omnipotence.  And since omnipotence is an absolute–one is either indestructible, or not–seeing one’s persona in pieces on the ground virtually precludes a return to a belief in one’s supremacy.

And so it is now with Tiger.  His spectacular fall shattered more than his marriage and his endorsement deals.  With its attendant rehab, counseling, and soul-searching, Tiger’s spectacular fall undoubtedly shattered the certitude of his belief in his own infallibility, opening the door (as his post-scandal play has shown) to those game-ruining demons of mental doubt and hesitation.

It’s sad, but it’s true.  Tiger Woods has lost his mojo.  And it’s not coming back.

[UPDATE: December 4, 2011.  With his win today at the Chevron World Challenge, Tiger Woods has proven me wrong. I stand humbly corrected.  Welcome back to the Winner’s Circle, Mr. Woods. KS]

This site uses Akismet to reduce spam. Learn how your comment data is processed.